Hey there! Got a minute? Tell us what you think of HuffPost.

There’s no bigger treat than flipping through old photo albums and getting to see your parents before they took on that role ― when they were just two young people in the blissed-out infatuation stage of falling in love. (Of course, the same goes for old-timey, black-and-white photos of your grandparents. So in love ― though probably not smiling in their wedding portraits, if you hadn’t noticed.)

In the spirit of sharing those good vibes ― and in honor of Hispanic Heritage Month ― we asked our readers to send us their favorite old-school pictures of their parents and grandparents through the years. See what they had to share and say below.

Note: Submitted captions have been lightly edited for style and clarity.

“This is a photo of my grandparents, José and Jessie Garibay, on their wedding day in 1954. My grandma was in nursing school when she met my grandpa, a soldier at a nearby base who endlessly pursued her. They were married 49 years and have two sons, four grandchildren and four great-grandchildren.” ― J. Headle 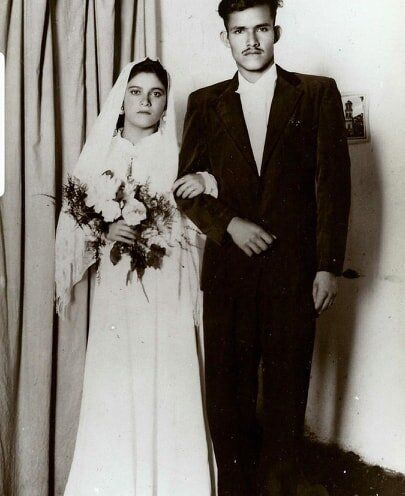 “Antonio Curiel, my grandfather on my dad’s side, met my grandmother Esperanza García when they were young. One day they ran away to a small house in the mountains. No one knew where they had gone to, but when they returned they were married. They eventually had 10 children and were married until the day he passed away.” ― Natalie Curiel 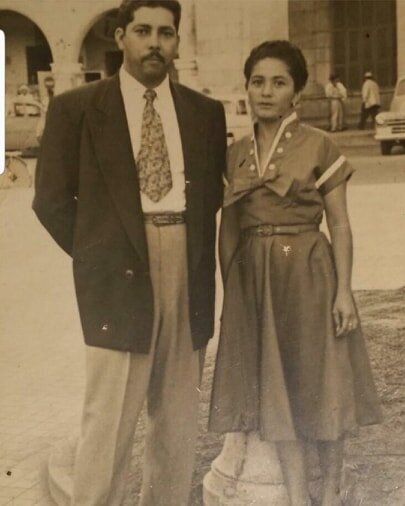 “Rafael Gonzalez, 16, was enrolled in the Mexican Army when he met my grandmother, Maria Luisa, and it was love at first sight. They married and had seven kids, but only two survived labor (my mom being one of the lucky ones). They were married until my grandfather passed away at age 65.” ― Natalie Curiel 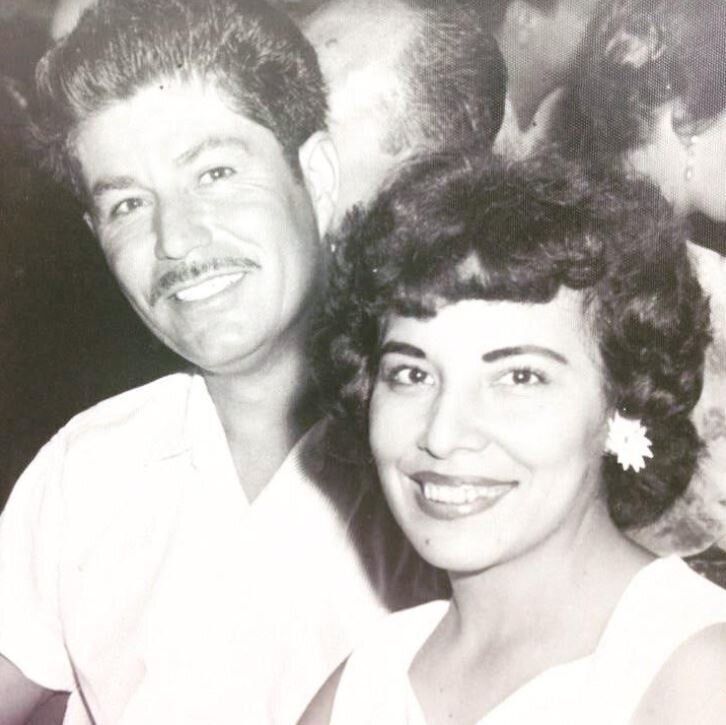 “My grandparents Fidel and Amelia ‘Molly’ Esquivel. They’ll be married 65 years on October 9th. They have seven children, 19 grandchildren and 20 great-grandchildren so far. They live in Gila Bend, Arizona. ♥️” ―Stefanie Esquivel 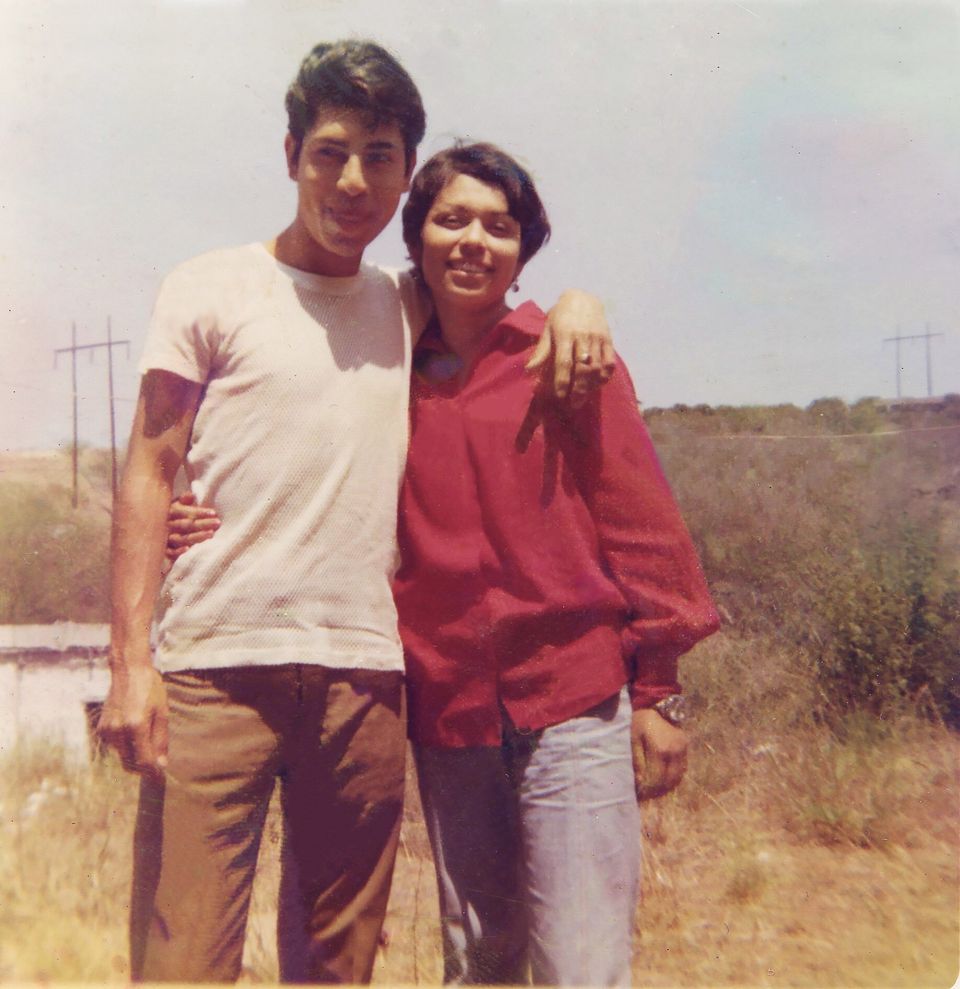 “My grandma has a collection of old photos she’s gathered over the years and she pointed out that this one was her favorite. I decided to restore it and surprise her with it for my grandparents’ 45th anniversary.” ― Isaiah Castillo 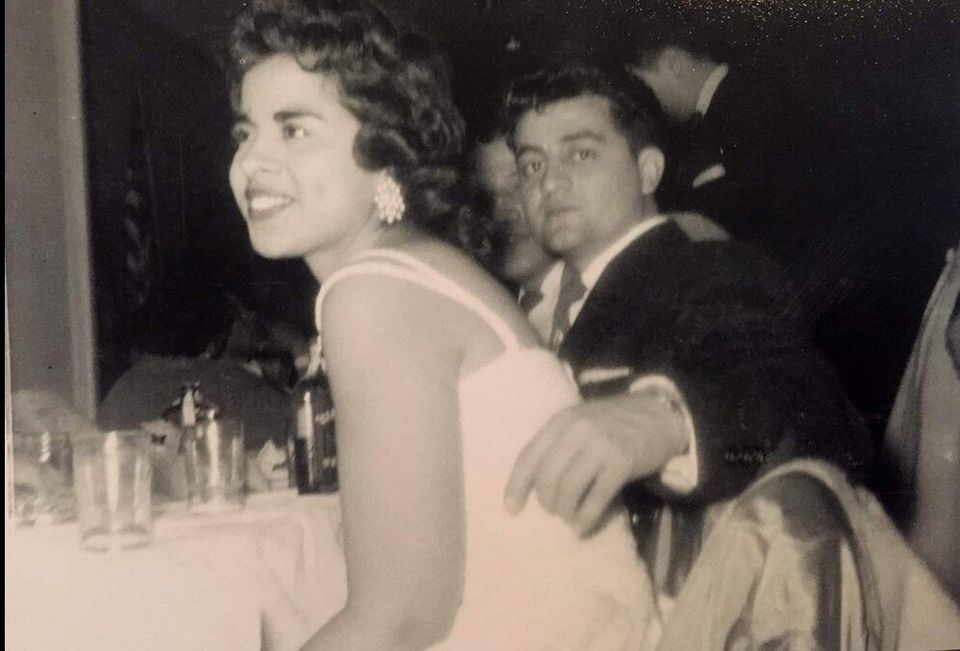 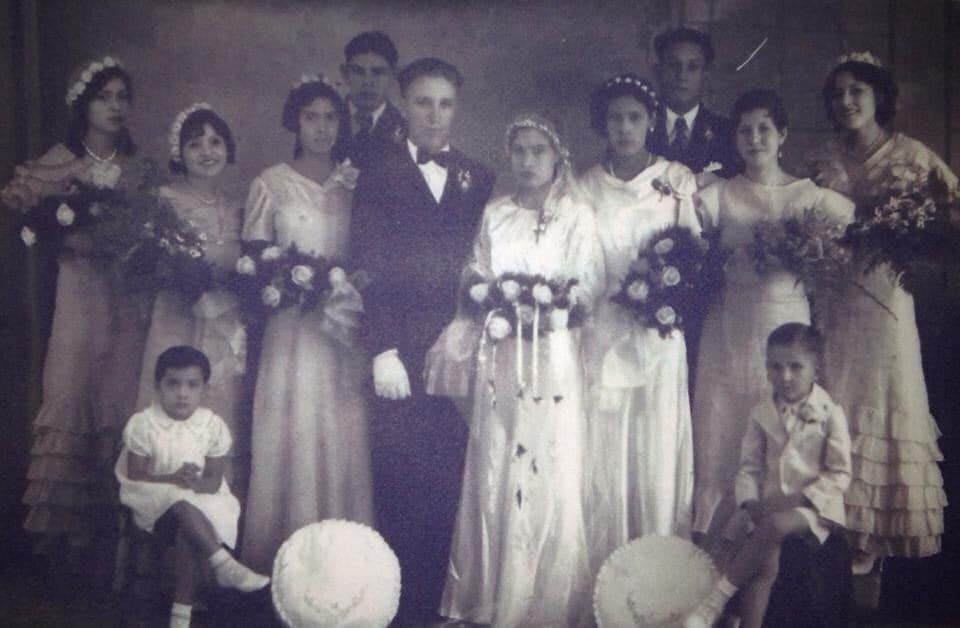 “My grandparents, Macario and Josefa Gutierrez, were married November 4, 1932. They were married 57 years. This is their wedding portrait. They met in New Braunfels, Texas, I believe.” ― Heather Gutierrez Howlett 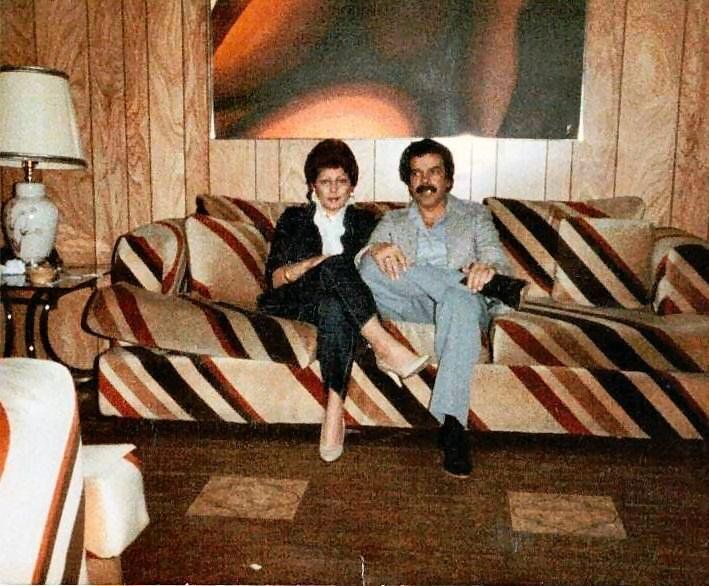 “My grandparents, Yvette and Robert, circa 1980 something, looking like the Latino Jeffersons. We lived in an eight-family apartment building in Sunset Park, Brooklyn, that they owned. As a couple in their 30s from Puerto Rico, they owned their own property in the greatest city in the world. And they were always dressed to impress. They’ve been together for 45 years and are still as crazy about each other as they were then.” ― Mason Medina 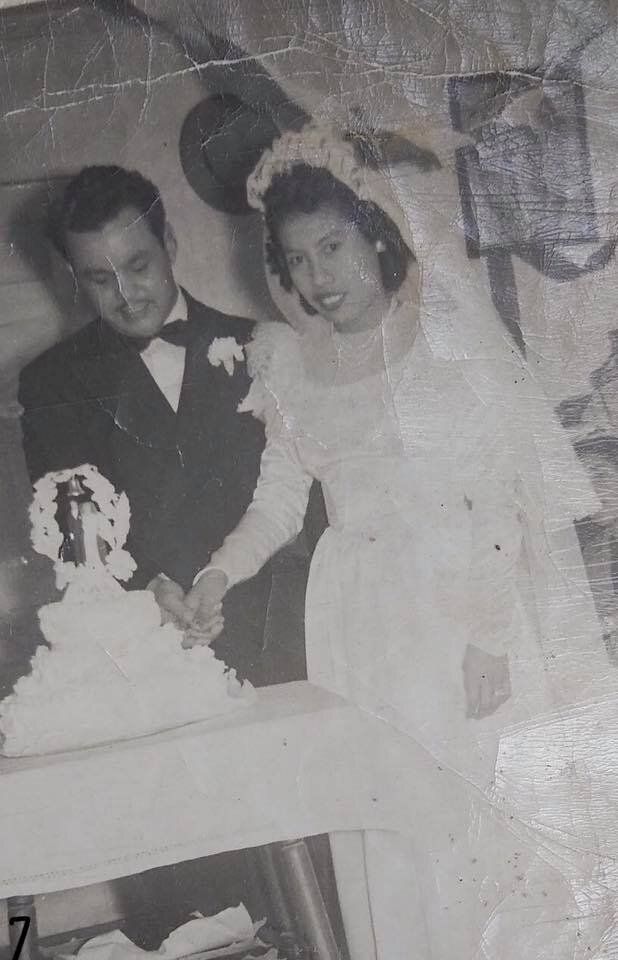 “This is my parents’ wedding day. Mr. and Mrs. Raul T Arriaga tied the knot in December 1948.” ― Victoria Arriaga Zamora 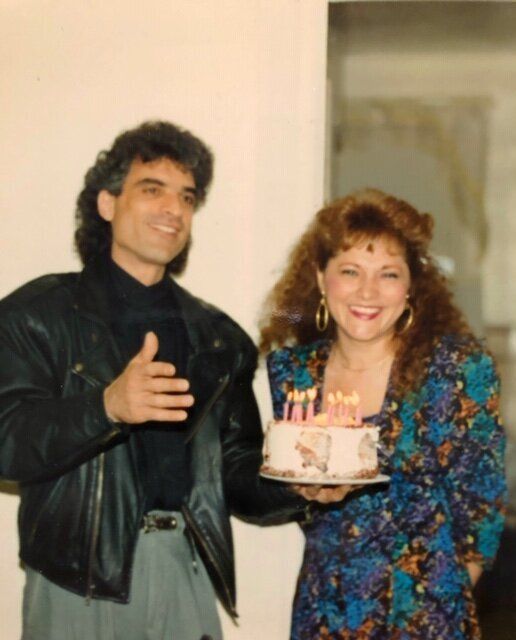 “My father, Luis, an Argentine soccer fanatic, met my mother, Hilda, a dancing machine from Peru, in New Jersey in 1990. They fell in love quick, with my dad telling her they’d have a family one day by their second date. He proposed a year later. By 1992, they had married and had me. The next years would prove to be a journey for them; they purchased their first home but faced some difficulties in their relationship. In 2009, they separated for a few months and filed for divorce. In September 2009, my dad, a longshoreman at the Port of Newark, fell 10 stories when the crane he operated flipped over with him inside. He spent 15 days in a coma and faced incredible challenges. During his recovery, my mother spent the next three years by his side. In 2012, my father proposed and they wed again; I served as their witness (maid of honor). In 2014, my father once again faced health complications after a surgery to correct some injuries from his accident. My mother spent the next year by his side once again. One night at the hospital, I sat with my dad on his hospital bed, my mom on a chair next to him. They held hands. My dad looked at her and said, ‘Do you know how much I love you?’ On November 14, 2015, my dad passed away with my mom and me by his side. His last words were ‘I love you.’” ―Romina Mollo 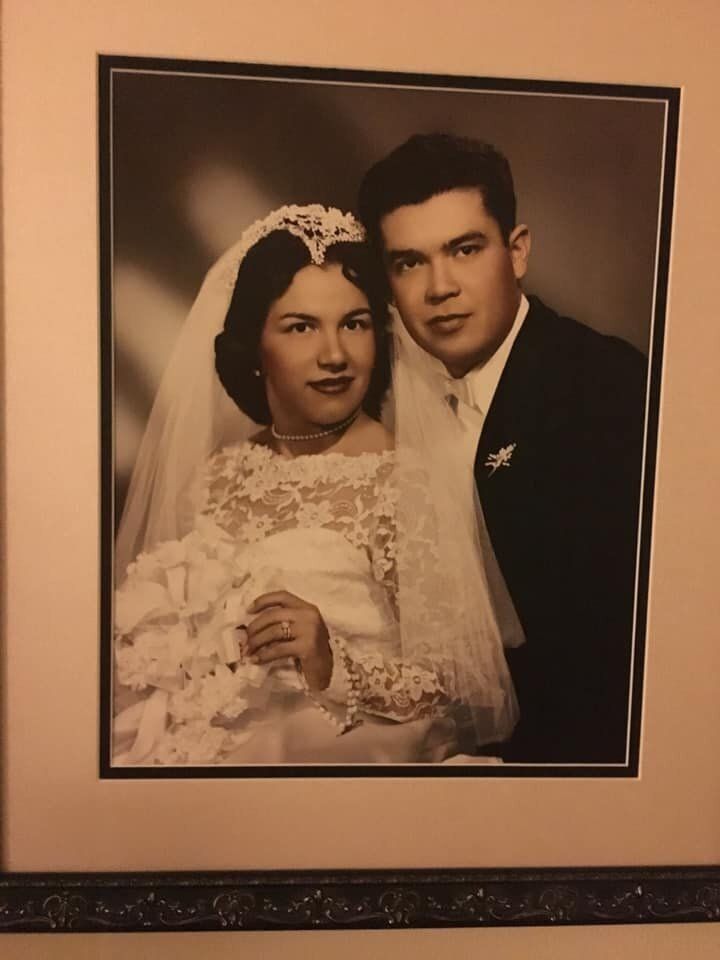 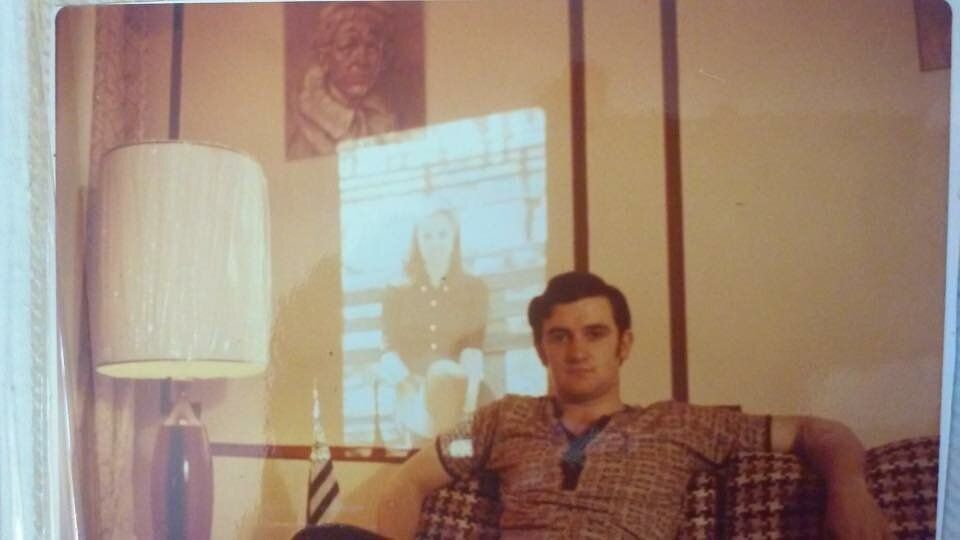 “My Uruguayan dad, Jorge Francisco Castagnola, and the picture projected on the wall is my Puerto Rican mom, Josefina Soto Medina. They met and married in New York City in 1972 and were together until my dad passed away in 2016. I’m not 100% sure of the backstory of this photo. My parents loved taking photos and they always had a projector showing pictures of them, their friends and our family. I remember the photo slides everywhere growing up.” ― Jeanette Castagnola Lazelle 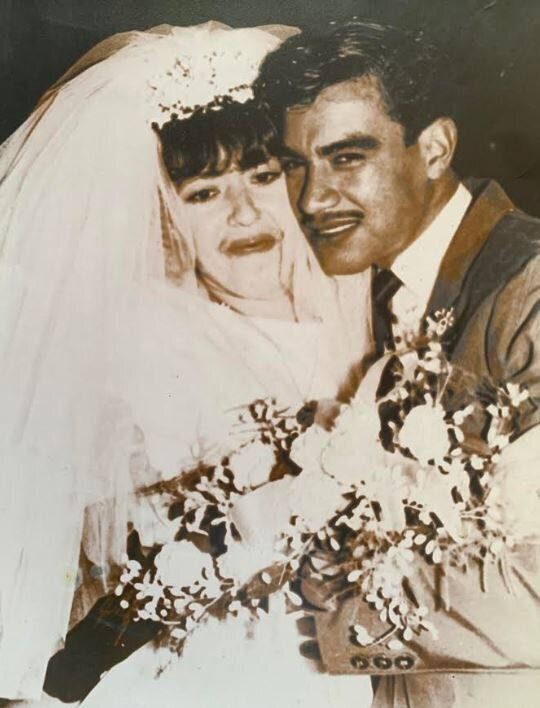 “These are my grandparents, Javier and Martha Palomino, on their wedding day 52 years ago in Mexico. They have five children and 11 grandchildren. My grandma said she really made my grandpa work to win her over. We lost my grandpa in 2016 and we miss him dearly. My grandparents were inseparable, and I just remember watching them when I was younger and seeing all the love they had for each other. He did anything and everything for my grandma. Coming from humble beginnings in Mexico and moving to California to give their children a better life is what America is all about.” ― Daisy Poindexter 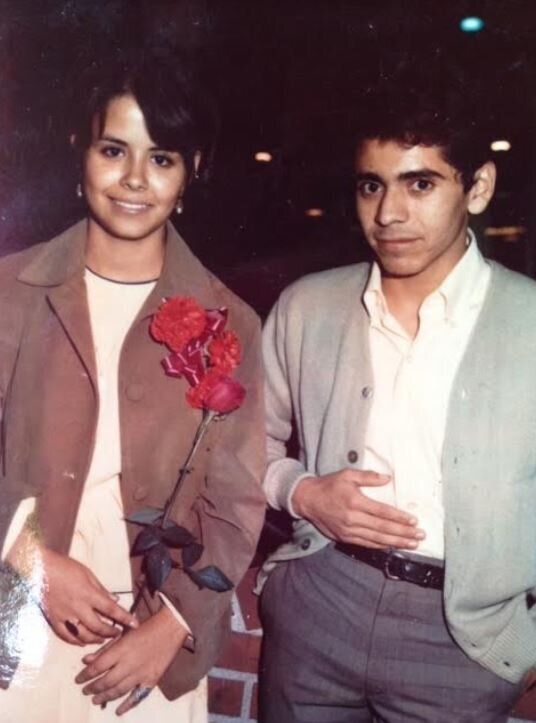 “These are my parents, Victor and Graciela Chavez. They went to Belmont High School in Los Angeles. This photo is from 1969/1970. My parents met when they were 15 and 16 years old and secretly eloped shortly after graduating high school. ❤️” ― Cindy Chavez 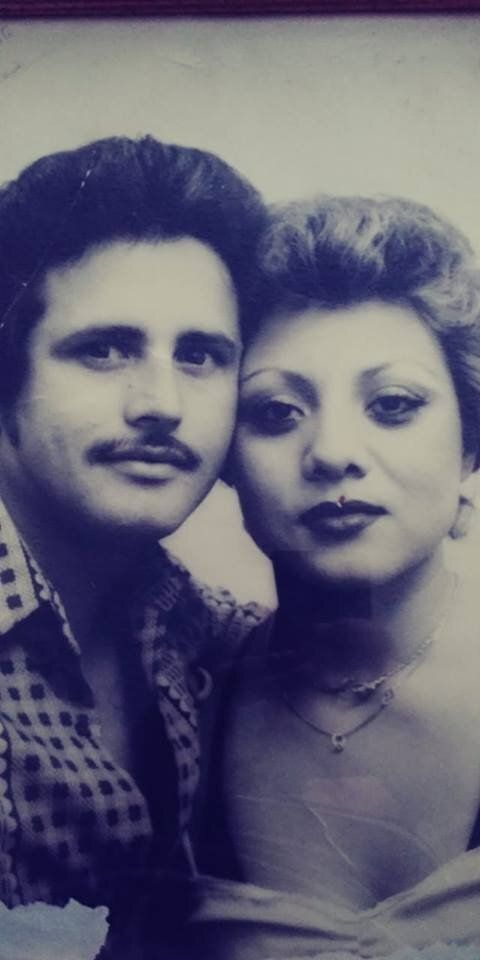 “A picture of my mom and dad at a carnival in Stockton, California, in the ’70s.” ― Aimee Estrada 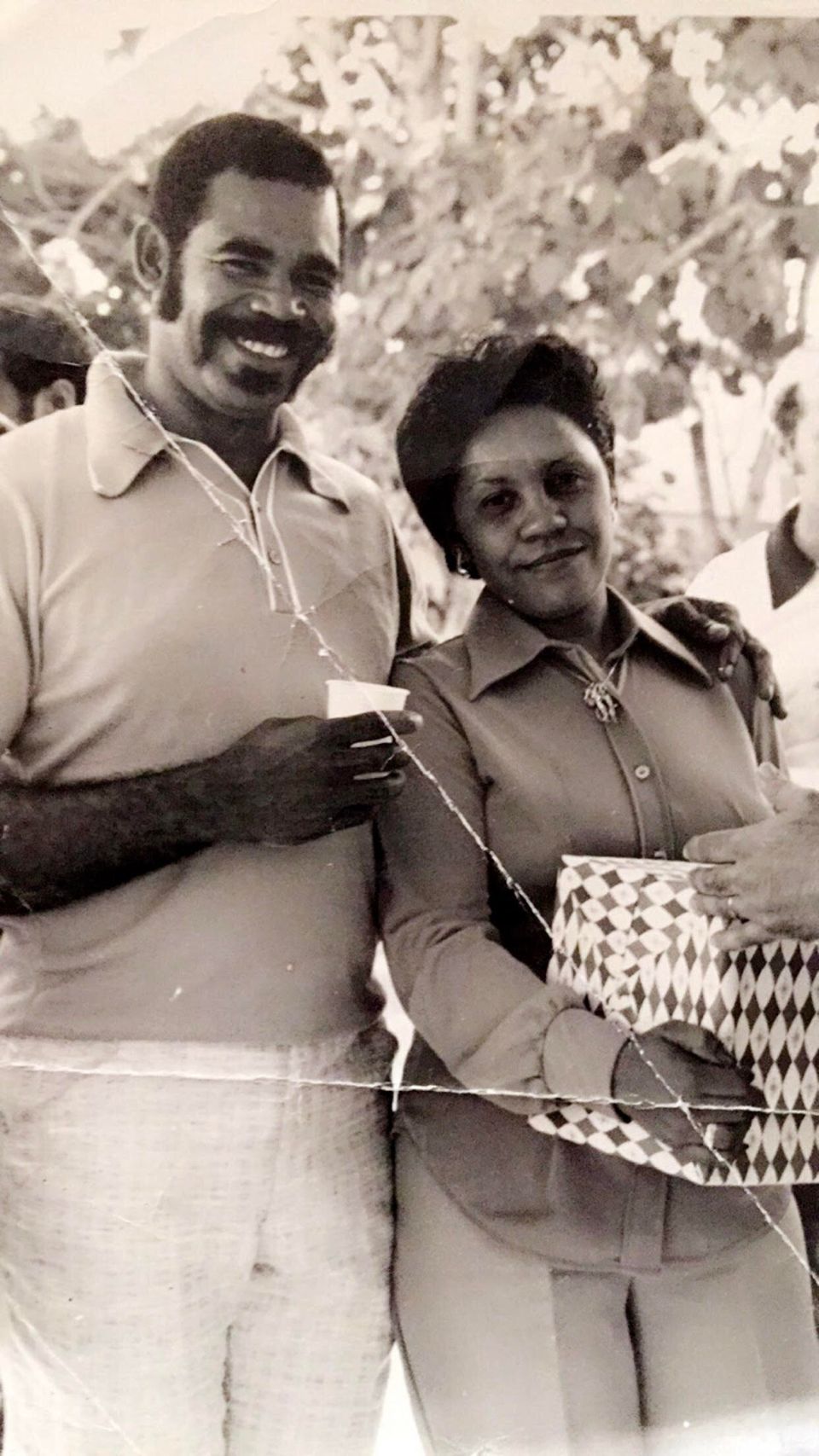 “My grandparents met at a dancehall one night. My grandfather was a very prominent Puerto Rican boxer at the time and had just left a match and went to go celebrate. It was a bit scandalous when they started seeing each other because my grandfather had recently gotten a divorce and was older, but it was love at first sight. They got married and soon after, they had three children. They still remain together today.” ― Jacqueline Marie 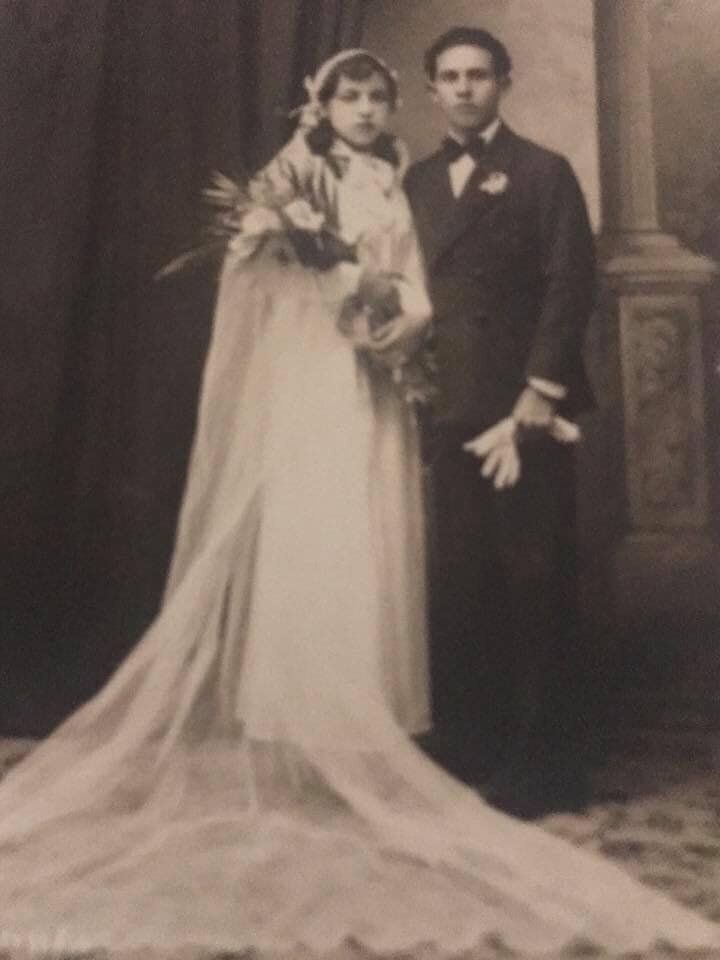 “Here’s my grandma, Connie, and grandfather, Jesus, on their wedding day. She was 16 years old. They were together for over 50 years before my grandfather died. They had six children and all of them are still alive. My mother, who is 85, is the oldest.” ―Anna Maria Gomez 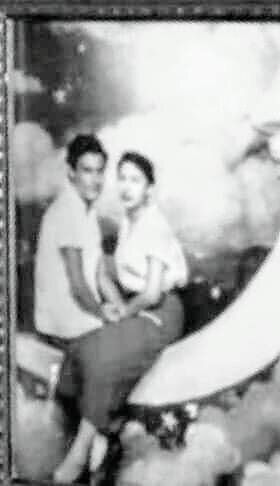 “A blurry but sweet photo of my mom and dad on a date in Riverview Park, Chicago.” ― David De Leon 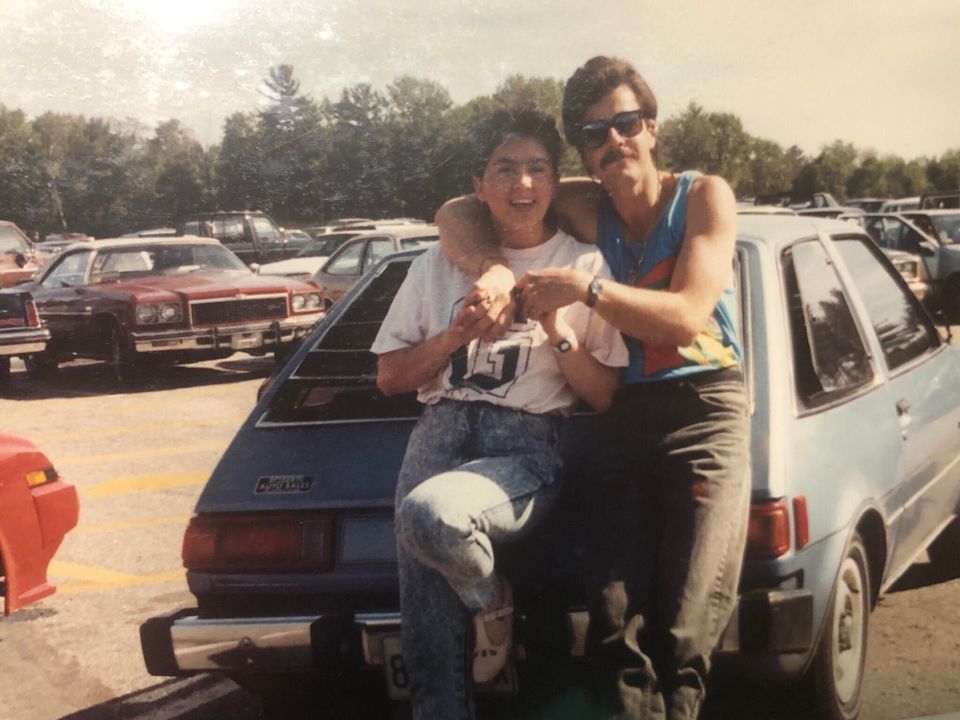 “This is circa 1988 when my parents immigrated to the United States from Colombia and paved the way to give me and my younger sister a better future. Today, as an immigration attorney for low-income New Yorkers, I stand among immigrants like them to fight in the pursuit of the American dream.” ―Carolina Guiral

Nuestras Voces Unidas (Our Voices United) is a HuffPost series created to honor Hispanic Heritage Month and amplify the diverse voices within the community. Find all of our coverage here.

You have been successfully signed up.